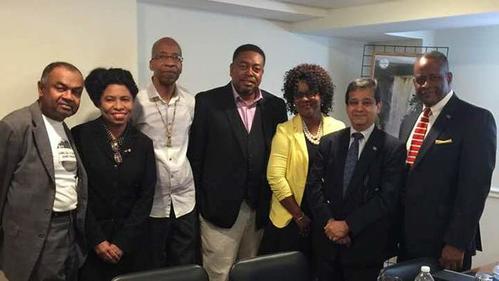 In a recent meeting with a Diaspora Delegation comprising organizations from Florida, New York, and Washington DC on August 30, 2018, Guyana’s Ambassador to the U.S.A., Mr. Riyad Insanally expressed full support for the new Diaspora mission presented by the delegation.

Ambassador Insanally poignantly noted that Guyana needs a more structured approach to diaspora engagement and expressed his interest in framing and developing a Diaspora Network to contribute more effectively to nation-building, and an evaluation of current diaspora engagement policy. The Ambassador told the delegation that he understood the frustration caused by bureaucratic bottlenecks in Guyana often encountered by members of the diaspora who are passionate about ‘giving back’, to the home country. The Ambassador promised to open doors to support diaspora initiatives.

The Ambassador also suggested that Diaspora engagement is not ‘rocket science’ and referenced the progress made by nearby Jamaica in engaging its diaspora. Ambassador Insanally advised the group that upon receipt of a formal proposal he would forward it directly to Guyana to seek the support from the government of Guyana. He promised to remain engaged and diligent and thanked the delegation for its efforts to unify the diaspora under one umbrella that could be of greater benefit to Guyana.

We strongly believe that consistent collaboration, diplomatic support and a sense of community underscore successful diaspora engagement, particularly at this critical phase of sustainable development in our dear land.